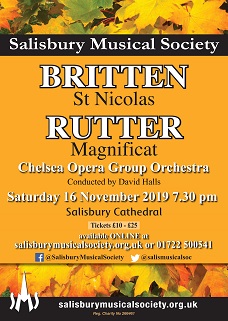 In 1947 the suggestion arose of a festival at Britten’s home town of Aldeburgh in Suffolk. Both local people and the Arts Council were enthusiastic and the first Aldeburgh Festival was held in June 1948. The major work on the opening night, 5th June, was a new cantata, St Nicolas, with words by Eric Crozier and music by Britten. The full score was completed only five days earlier. The work tells the story of the life of St Nicolas, Bishop of Myra and Patron-saint of children, seamen and travellers. Like the music of Bach and Tippett, and Britten’s own later Noyes Fludde, St Nicolas contains two well-known hymns which the audience is invited to sing.

John Rutter’s music will be familiar through his well-known Christmas carols, among them the Shepherd’s Pipe Carol and Donkey Carol. There is no doubt that with these pieces Rutter has tapped into a highly melodic vein with colourful orchestration that many people regard as seriously missing in much recent music. Rutter has also proved that he is also a master of larger scale composition and the Magnificat is one of the best-known of these.

Try Before You Buy

Why not listen to the music before you buy your tickets? We have included YouTube clips of the pieces being performed as an example.

We are always looking for new singing members for the choir. If you’re interested, read more about joining on our membership page and get in touch.